The Nias Pro has been treated to an absolutely dreamy forecast with picture-perfect waves every day, culminating today with the Finals of the QS division held in thumping righthand barrels and rippable long walls.

This event is quickly becoming one of the best and most anticipated worldwide on the Qualifying Series as the last three editions have all scored incredible conditions and witnessed world-class action from both the local Indonesian contingent and a strong international presence in the draw.

The women’s Final was a battle of youth vs. experience, an up-and-coming Junior, Ella McCaffray (USA) against a Championship Tour veteran Paige Hareb (NZL) and it did not disappoint. 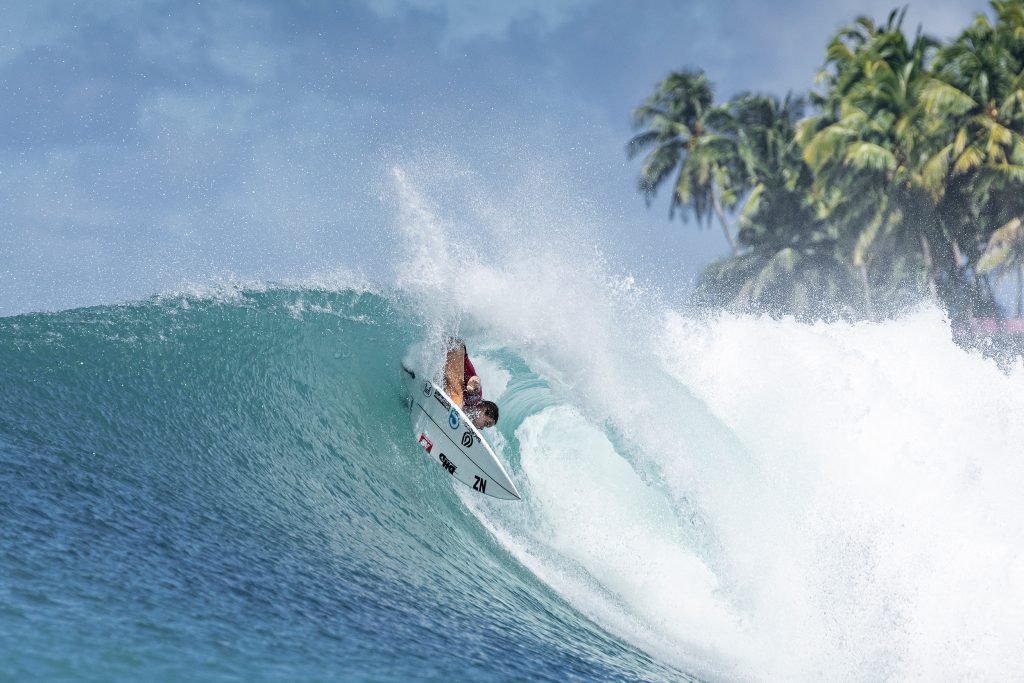 After a couple of unsuccessful efforts from both surfers to get tubed, McCaffray was first to put a score on the board with a combination of turns to set the early lead. The regular vs goofy battle was on as soon as Hareb found a clean wall to exploit, getting the better of the exchange to get back in first position.

The American answered with a little cover-up to carve combo but never got quite deep enough in the barrel to rival Hareb’s highest score of 7.50. The surfer from New Zealand quickly backed it up with a 6.20 to put her opponent under pressure halfway through the Final.

Hareb put the final nail in her opponent’s coffin with two massive backhand turns and a near-perfect 9 point ride in the dying moments of the heat to secure the win.

“I like to think positive going into it but there were so many good surfers here and the waves have been insane all week so anything could have happened,” Hareb said. “I’m really happy for the way it’s worked out. Hopefully all the kids back home see that Kiwis can win international events and it gives them a bit of inspiration. And hopefully Billy (Stairmand) and I keep flying the flag high for the rest of the year.”

Hareb had a stellar run through the Nias Pro, posting excellent numbers in all of her heats and dispatching some of the strongest surfers in the field, namely Kobie Enright (AUS) and Kailani Johnson (IDN) in her previous heats today. The 32 year-old from Oakura has been on a tear lately and looks poised to finally get a break on the Challenger Series upcoming. 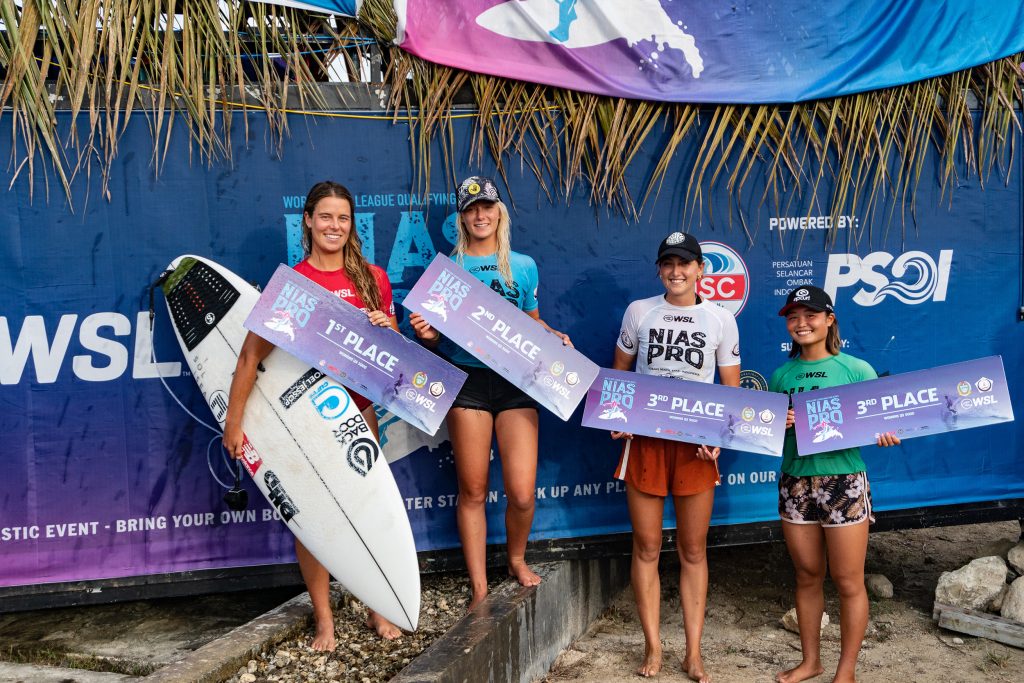 Her opponent Ella McCaffray (USA) is still a Junior and only starting to compete on the global stage but showed signs of brilliance at Nias, especially in her Semifinal when she locked into a crazy deep barrel to post a near-perfect 9.77 for the win. The American has a very successful Indonesian campaign as she reached the Final of the event in Krui last week as well, but she’s yet to break out with a maiden win on the QS.

Kailani Johnson (IDN) was the last local surfer in the Finals Day women’s draw and was unfortunately eliminated by an unstoppable Hareb in their Quarterfinal matchup.

In the Men’s Final, the winner in Nias last time the event was held in 2019, Jordy Maree (ZAF) took on another rookie in young Queenslander Marlon Harrison (AUS).

Maree was first on the attack mode with a couple of big backhand snaps to put a score on the board. Harrison waited patiently and the ocean sent him an absolute bomb in the form of a big and clean barrel, which he rode perfectly to drop the first perfect 10 point ride of the event to the cheers of the enormous crowds lining up the waterfront. The Australian backed it up with a smaller and shorter tube for a 6 to put the reigning event winner against the ropes looking for a near-perfect score.

But Maree didn’t back down and when the opportunity presented itself, the goofy footer locked in to a big barrel of his own, punctuated by a nice turn for an 8.83 to get right back in the fight with a little over 10 minutes remaining. The South African tried his luck on a smaller inside wave under Harrison’s priority but came up just short of the required score and the Australian claimed his first win on the Qualifying Series in spectacular fashion with the best wave of the entire event.

Already a first-time winner on the Junior series earlier in 2022, Harrison wasted no time to graduate to a win in the big leagues, courtesy of some of the most dynamic and some of the best barrel riding seen all week at Nias.

“I’m speechless right now,” Harrison said. “Thanks everyone who has come to watch and thanks Nias, this has been incredible, I’m frothing!” 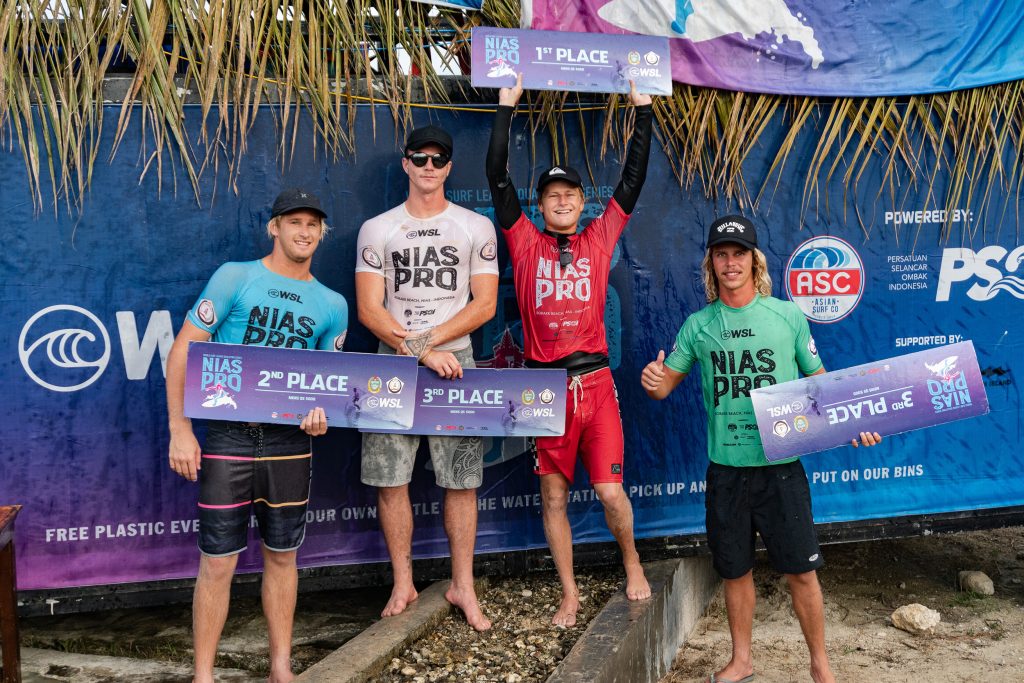 Harrison is the brother of Piper Harrison (AUS) who actually won the Nias Pro when it was last held in 2019, keeping the Harrison streak going at Lagundri Bay.

Jordy Maree (ZAF) was the form surfer of the week in Nias, posting incredible scores all the way into the Final, and he came extremely close to defending his title on a wave he openly praised as one of his favourites.

Event favourite and Indonesian superstar Oney Anwar carried the local hopes all the way to the Quarterfinals where Martin put a stop to his Nias campaign in equal 5th place.

With the completion of the Nias Pro, the Asia and Australia/Oceania regional rankings have been re-shuffled, here are the new current Top 5s:

The next event for Qualifying Surfers in both regions will be the Taiwan Open of Surfing QS3,000 from November 11-20, 2022 at Jinzun Harbour, Taitung / Taiwan..

Event organisers will reconvene at Lagundri Bay to make the call on Monday at 6:30 a.m. local time for a potential 7a.m. start of the Junior Qualifying Series event..