19 September 2022, Bali-Indonesia:  After two full days of exciting competition on Bali’s famous Kuta Beach, Tipi Jabrik’s Grom Patrol supported by Vans Indonesia and Mamaka by Ovolo ended yesterday just before sundown with spectacular and tightly contested performances in the 7 finals, starting with the Under 10 Boys the running through the Under 10 Girls, Under 21 Boys and Girls, Under 14 Girls and Boys, and then ending with the Under 16 Girls and Boys.  Nearly 100 groms signed up to compete in this fourth annual event, which was blessed with great waves and great weather and was broadcast live to the world via the Asian Surf Co’s (ASC) YouTube and Facebook channels. 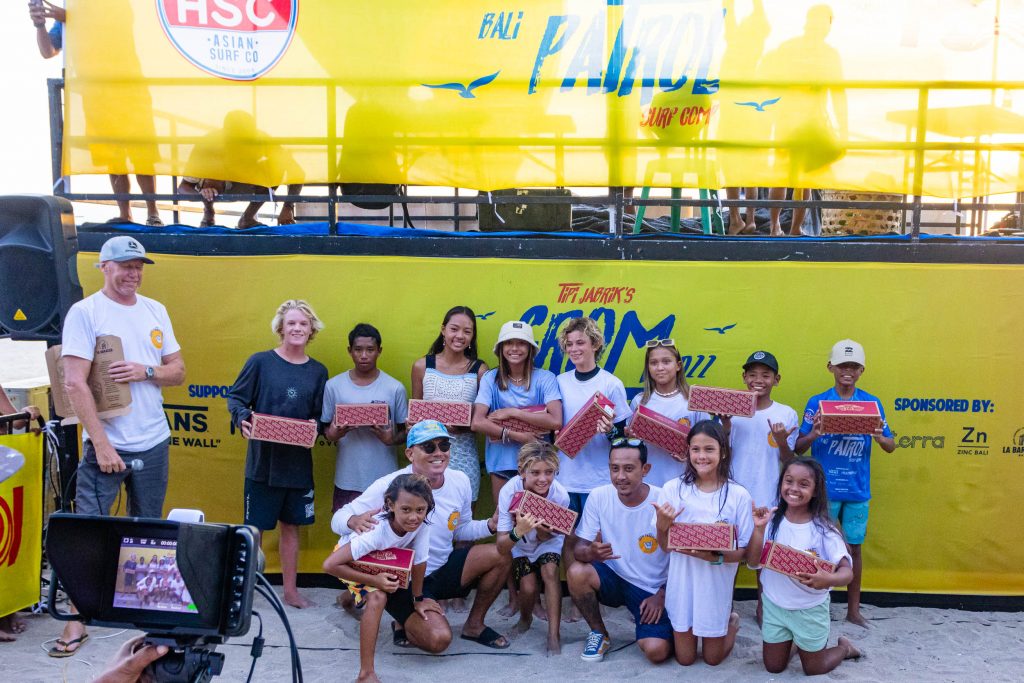 The day was full of highlights, the most dramatic in the last final of the day in the Under 16 Boys. The crowds on the beach and the two top scoring finalists, Westen Hirst and Philip Duke, waited anxiously on the beach for what seemed like hours for the judging panel to announce their decision, after a last second take off and completed aerial by Duke who was hoping the score would be enough to get him back into the lead and take the win over Hirst.

It was Duke that put up the first excellent score of the final of an 8.5 (out of a possible 10) to take the lead, but was then bumped into second spot after Hirst found his rhythm and earned first a 7.50 and then added his own excellent score of an 8.0 to tally up a 15.50 total heat score.  Finally the judge’s decision was revealed and Hirst was the champion,  as Duke’s score came up just short of the 7.0 he needed, getting a 6.53 from the judges.  Hirst was on point the entire event, winning his heats with very mature surfing, posting big scores with turns and also when he took to the air.  Final score – Hirst 15.50 to Duke’s 15.03. 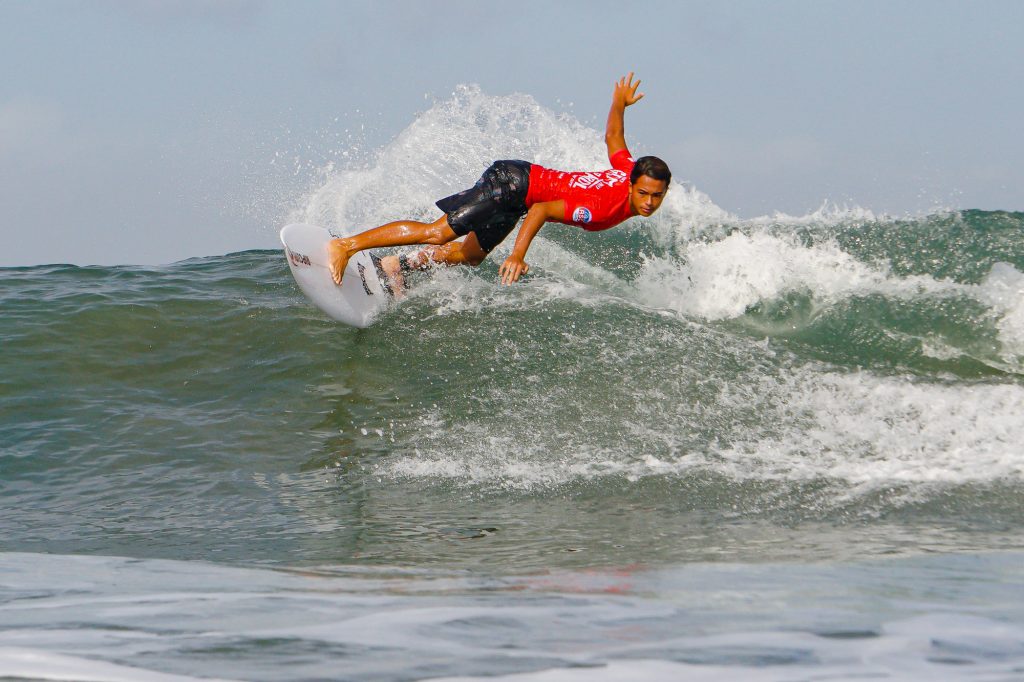 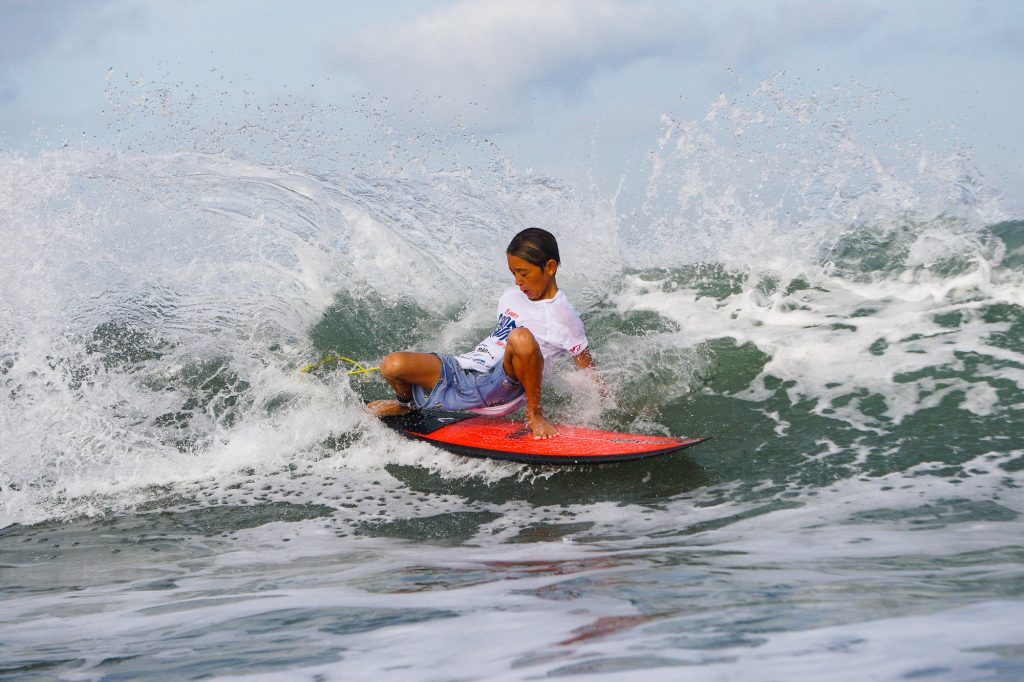 In the Girls Under 16 Final, it was another nail biting finish as Georgie-May Hicks snatched the victory away from Nala Rabik in the dying seconds to win.  It was hard to determine who was more excited by her win, Georgie or her dad, but from the podium she said, “I’ve competed in all the Grom Patrol events since I was 12, so as this was the last time I can compete, it’s extra special to get this win.  Thanks to Tipi and the ASC for making these events, and to my sponsors and Dad for his support here on the beach today.” 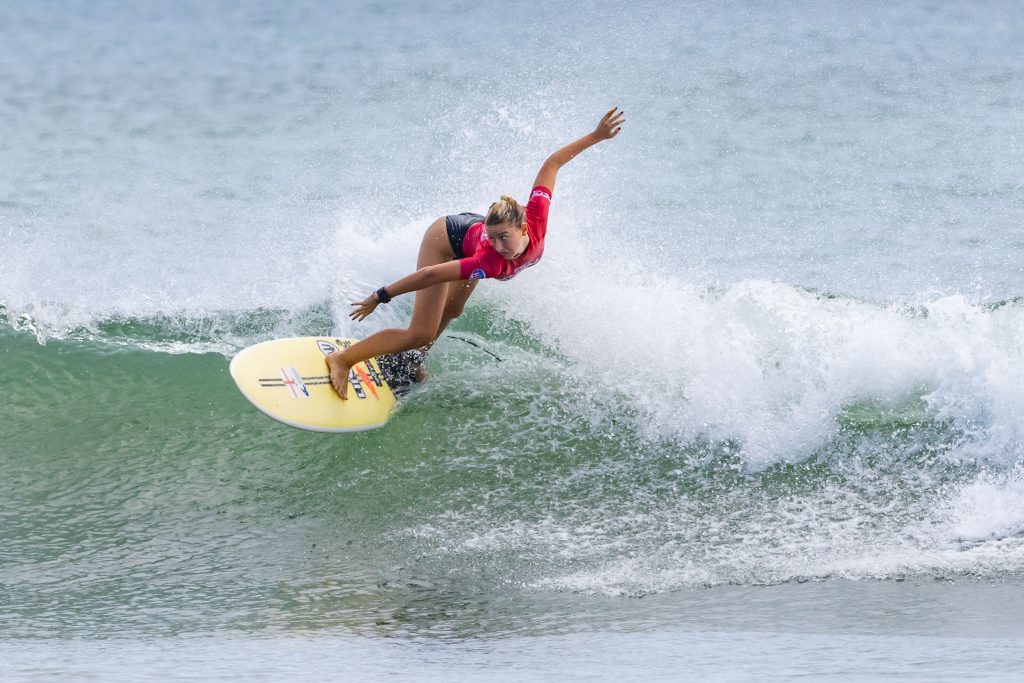 Another big win came in the Girls Under 14 division, as Tipi Jabrik’s daughter Hanasuri “Suri’ claimed her first Grom Patrol win, finding the best and longest righthanders in the final to earn a heat total of 14.17 points with a 7.67 and a 6.5 in her scoreline, and leap ahead of runner up Lidia Kato (heat total of 10.47) for the win. 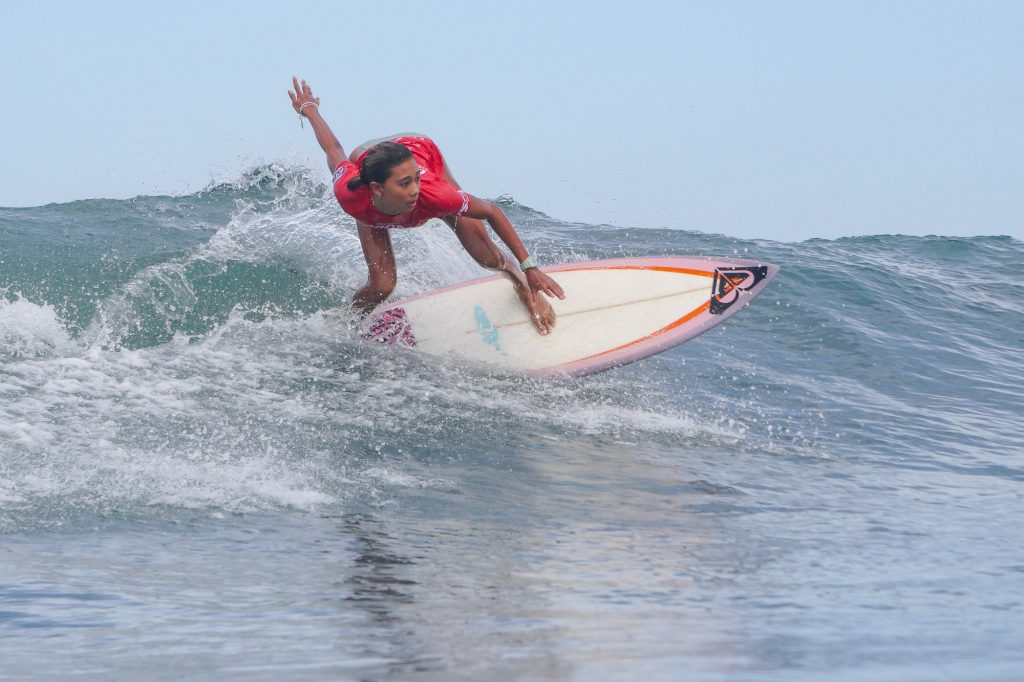 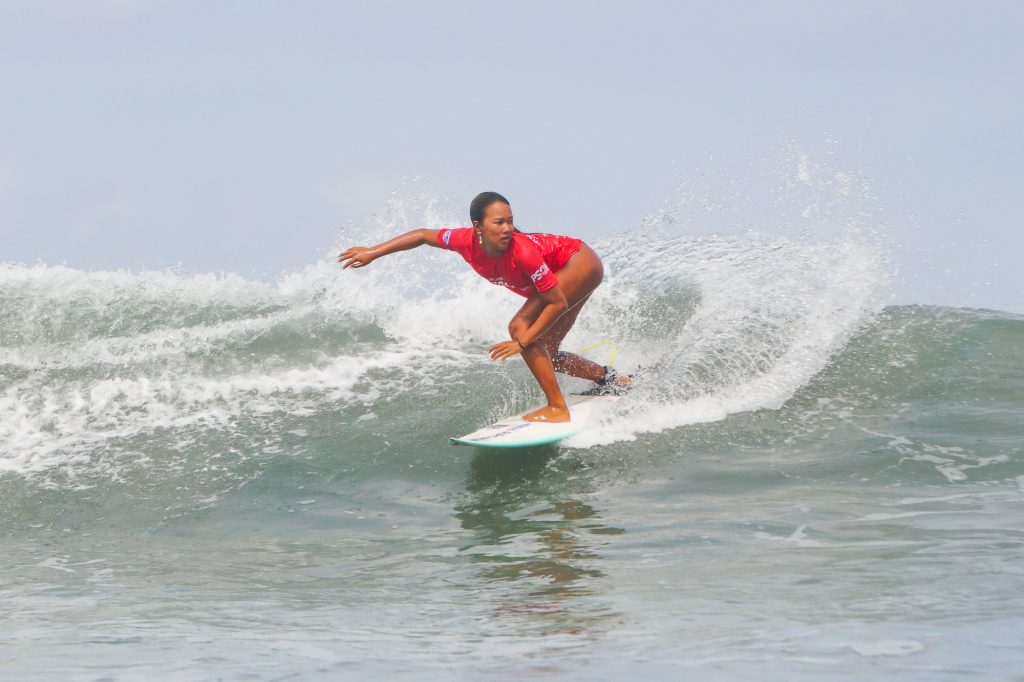 The highest total heat score of all the Finals was a 17.67, coming from huge 9.5 and 8.17 scores in the Under 14 Boys division by Legian’s Made Balon.  He threw away two 7 point plus scores to eclipse his rivals, the closest of which could only boast a high score of 6.27. 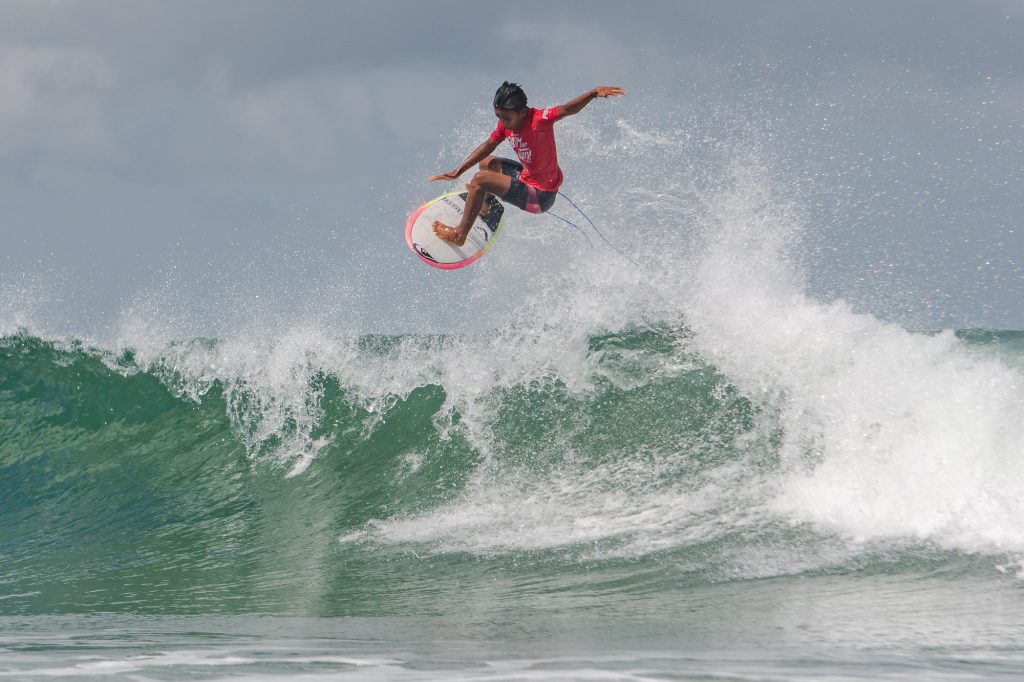 In another high scoring final, the Under 10 Boys was taken out by 9-year-old Gede Dharma Wisesa, also from Legian, who had easily dominated each of his heats coming into the final and cruised to victory thanks to his 8.67 and 7.00 scores.

A very impressive performance was turned in by Dian Septiari in the Girls Under 10 division, who is from Kuta and proved her amazing talent and wave knowledge by posting an excellent score of 8.67 to lead the final and end up with a total score of 13.67 as compared to her nearest rival Fiona Fuante’s 8.03 total heat score.  This young girl has heaps of talent and competitive savvy, making for a great example for other young Indonesian girls to follow. 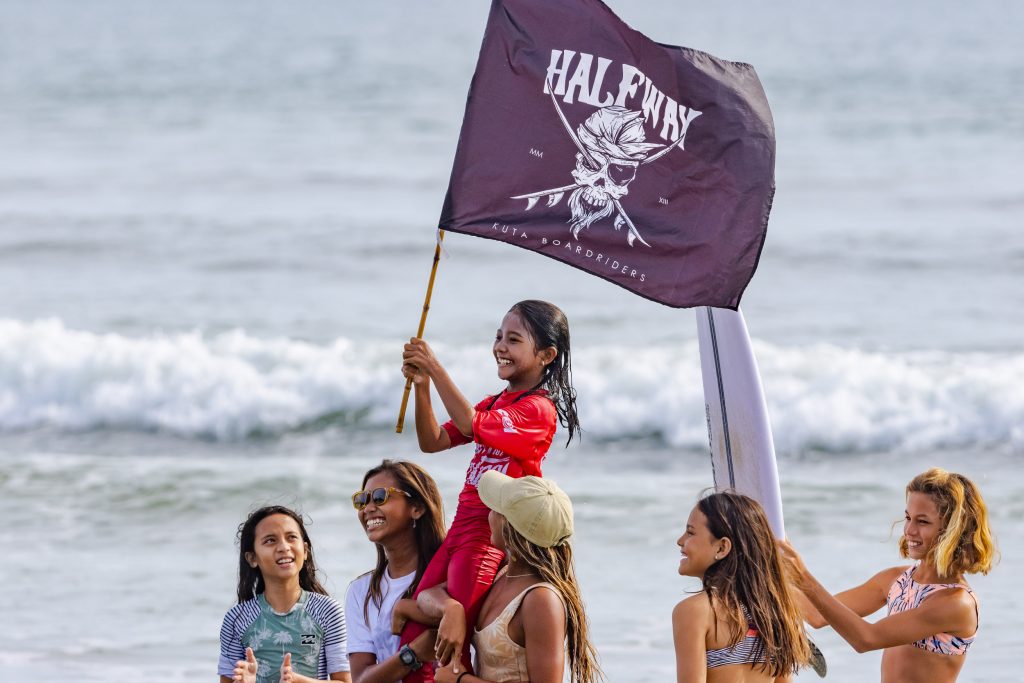 These two days at Kuta Beach were full of many more highlights, and when asked to evaluate the performances he witnessed, here is what PSOI (Indonesian Surfing Federation) President Arya Subyakto had to say:  “I’m really impressed by the performances of both the male and female competitors at this event, as I can see a lot of progress being made over the last few years. I’m really happy to see the Under 10 division and how remarkable they are surfing already!  This division is like the very beginning for them, and indicates how strong the talent is at this young age…which when nurtured is super positive for the future of Indonesian surfing.  I hope we can make more events like this not only in Bali but around Indonesia using this as an example.  This will result in Indonesia’s success in the sport of surfing from small events like this to WSL world champions and ultimate Olympic champion surfers.”

Grom Patrol creator Tipi Jabrik was also very pleased at the end of the event, saying “This is the biggest Grom Patrol yet, and I’m really happy with how it came together with so many kids participating, and how all the winners truly showed off the quality of their surfing.  I hope we can keep growing this event and then take it to other countries here in Asia.  A big thank you for all the support received from our sponsors like Vans Indonesia and Mamaka and others, and the beach community here and the Halfway Kuta Boardriders, and the hard work from our ASC team…we just can’t do it without all of you.”

You can watch the replay of the Grom Patrol at https://www.youtube.com/c/AsianSurfCo as well as view daily video highlights, plus see all the heat scores at LiveHeats at https://www.liveheats.com/events/44003

And of course, please follow the ASC and the Grom Patrol on Instagram at @asiansurfco and @grom.patrol

Press Photos (for media only, not for commercial use, copyright Tim Hain) can be found at :

During the weekend, special entertainment, food and prizes were provided by Vans Indonesia, as well as special rates at the beachside Mamaka by Ovolo hotel, for the 4th annual Tipi Jabrik’s Grom Patrol event, and other generous support as follows:

Thanks to our generous Grom Patrol supporters below for their contributions:

Drifter: @driftersurf = The Art of Surfing

Tipi Jabrik’s Grom Patrol is thankful for the support of the following:

The ASC’s mission is to grow the sport of surfing in the Asian region by offering reliable and consistent resources and assistance to both small and large organizations as they work to progress the sport and their surfing athletes, including consulting and management, live computer scoring, certified judges and professional staffing, event media packages, athlete management, and site surveys, as well as ISA surf instructor and judging/officiating programs.